Franciscan Friars Arrive in Boston in the 19th Century

1860: Pamfilo da Magliano, OFM, superior of the custody of the Immaculate Conception based in Western New York, sent Emeliano Gerbi, OFM, to Boston.

1866: Emeliano founds the Gate of Heaven Church in South Boston.

1873: Emeliano died and Joachim Guerrini, OFM, was sent to take his place.

Arch Street in the 20th Century

September 25, 1944: Shortly after Archbishop Cushing was promoted to the See of Boston, the idea of a Franciscan friary and church in downtown Boston was discussed with the guardian of St. Francis Friary, Matthew Miller, OFM.

October 29, 1944: At this time a deﬁnite invitation was extended to the Franciscan friars of the Holy Name province to establish church and friary. This was in the midst of World War II.

March 7, 1945: At the invitation of His Excellency, Most Reverend Richard Cushing, the friars began hearing confessions in the Thomas More Oratory at 49 Franklin Street, which was under the direction of diocesan priests.

October 20, 1945: Small four-story building was acquired on 103 Arch Street, near Summer Street, to serve as a temporary chapel.

March 1946: The Province purchased the lots from 100 to 110 Arch Street, through to 21-29 Otis Street, on which a larger facility could perhaps someday be built.

February 19, 1947: St. Anthony Shrine was opened to the public on Ash Wednesday. (The friars decided to name the new chapel in honor of St. Anthony of Padua, who was declared a Doctor of the Church in 1947.) The first friar staff was composed of five priests, Harold Blake, OFM, Paul Power, OFM, Cosmas Girard, OFM, Gabriel McDonald, OFM, and Michael Barry, OFM, assisted by three brothers: Andrew Carberry, OFM, Julian Reister, OFM, and Clement McGee, OFM. The friars initially commuted each day from Brookline.

April, 1947: The friars start living in the basement of 103 Arch Street. In the one unpartitioned room, they set up a stove for cooking, a large table, a few comfortable chairs, and cots for sleeping.

May 14, 1947: Harold R. Blake, OFM, blessed an auxiliary chapel on the second floor. This chapel was designed to hold the overﬂow from the main chapel on the street level.

Fall, 1947: The friars begin to renovate the upper three floors to make a friary for the friars serving at the shrine.

February 19, 1948: A Solemn Mass of Thanksgiving for all the blessings of the past year was offered at the Shrine. Approximately 300,000 confessions had been heard in the ﬁrst year. Some 6,000 confessions were heard by 25 priests on Christmas eve over a period of 18 hours.

February 19, 1950: On the third anniversary of the opening of Saint Anthony Shrine, Friar Harold R. Blake, OFM, pointed out that attendance at the daily Masses exceeded 1,500. There are about 5,000 communicants each week. Over 5,000 people attend Saint Anthony Novena Devotions every Tuesday.

October 16, 1952: Most Reverend Richard J. Cushing, archbishop of Boston, blessed the site and broke ground for the new Saint Anthony Shrine. Celsus R. Wheeler, OFM, provincial minister of the province of the Most Holy Name of Jesus, headed a representative group of priests and visiting friars. His Honor, Mayor John B. Hynes represented the City of Boston. A large crowd of the faithful were present. The general contractor for the new Shrine was Thomas O’Connor and Sons. The Shrine and friary were designed by Br. Caietan Baumann, OFM.

April 25, 1953: The highlight of the year was the investing of His Excellency, Most Reverend Richard J. Cushing, in the Franciscan habit on the occasion of his becoming a member of the ﬁrst order by letters of afliliation from the general minister of the Order. This is the habit in which Cardinal Cushing asked to be buried.

October 8, 1953: Laying of the cornerstone for the new Saint Anthony Shrine and Friary.

December 31, 1954: The doors of the new St. Anthony Shrine were opened to the public for the first time. A temporary altar and folding chairs had been installed in the unfinished auditorium, and some 800 persons gathered for a Holy Hour at 11 p.m, culminating in a High Mass at midnight.

November 23, 1955: Blessing and dedication of the new Shrine and Friary by His Excellency, Most Reverend Richard J. Cushing, Archbishop of Boston. The cost to build the shrine was $4,500,000 – well over $30 million dollars in today’s money. According to legend, Cardinal Cushing joked at the dedication: “I gave the Franciscans permission to build a chapel and a friary, and they’ve constructed a basilica and a hotel!” but he was delighted. As he told the crowds: “No other order but the Franciscan Order would ever undertake a work of such magnitude. The difficulties were enormous, with whole litanies of trials, troubles, and worries; and its completion is a perfect tribute to the Wonder Worker of Padua.”

1957: Holy Name province set up a program in pastoral theology at the shrine for newly-ordained priests. Intended to remedy the inadequate pastoral preparation in the seminary at that time, this “fifth year” program was intended to provide a kind of apprenticeship for new clergy. With Masses, Confessions, and counseling going on constantly, large classes of 15-25 new friar priests a year were plunged into a very active ministry at the Shrine from Thursday to Sunday, while Monday to Wednesday they had formal classes in counseling, church law, homiletics, and other practical courses.

1969: The shrine expanded its efforts even further, as Cardinal Cushing asked the friars to open a satellite chapel at the recently completed Prudential Center. David Fleming, OFM, was chosen as the first director, and its doors opened on Nov. 11, 1969. Cardinal Cushing called it “Everyone’s Portiuncula in Boston.” The friars who staffed the chapel commuted from Arch St.

1972: The shrine celebrated its 25th anniversary. In the mid 70s, Joseph Sullivan, OFM, began to make efforts to diversify the traditional ministries of the Shrine. A dynamic Young Adult Catholic group was formed, and a lunch-time lecture series, “Rebuild My House,” was initiated to provide adult faith formation.

1981: The friars opened a breadline, providing a lunch each; two years later they were serving some 200 people daily. Louis Canino, OFM, rector from 1982-85, decided on a more comprehensive approach. He arranged the purchase of an eleven-story building several blocks away, on Boylston Street. St. Francis House, as the new facility was called, allowed friars and lay volunteers to offer sit-down meals.

1984: St. Francis House was dedicated in 1984.The center began hiring a professional staff providing clothing, psychological services, and nursing care as well. St. Francis House created its own board of directors, but the friars and the Shrine have remained connected for many years with the work there.

1990s: The shrine had a heightened emphasis on involving lay people in the ministries of the Shrine. This was not simply due to the declining number of friars: it flowed out of the Province’s new mission statement: “We are disciples of Christ who seek to bring the Gospel into the everyday experience of all people, through popular preaching, teaching, and pastoral leadership. We foster Christian discipleship by collaborating with those whom we serve and by sharing in solidarity with all people, especially the alienated, the immigrant, and the poor.”

The new millennium has seen new directions in the Shrine’s mission as it has continued to participate in the life of the city of Boston in meaningful ways. As the downtown workplace continues to face many new challenges, so the Shrine has continually attempted to respond to the emerging needs of the people it serves. Just a glance at the many programs and activities currently offered at the Shrine illustrates this: the Wellness Center, the Mychal Judge Center for Recovery, the Pietà Ministry to parents who have lost a child, the Lazarus Ministry providing burials for those who die alone or without means, the ambitious Franciscan Food Center, as well as the many, many continuing programs begun in earlier decades! Of course, the central focus of the Shrine’s ministry has remained constant for 65 years: providing a convenient and prayerful setting for people desiring to praise and worship our God – currently through 12 weekend and seven weekday Masses, as well as an extensive schedule for the Sacrament of Reconciliation.

Yes, our friar staff is not what it once was in our peak years. But we still have twenty full-time men, as well as a number of senior, retired friars here, eager to serve the people of God in downtown Boston. As we celebrate our past, we also look toward our future, confident that our good God and the “Wonder Worker of Padua” might continue to bless the work of the “Church on Arch Street” for many, many years to come.

Other historical photos of St. Anthony Shrine can be found on the shrine’s Facebook page. 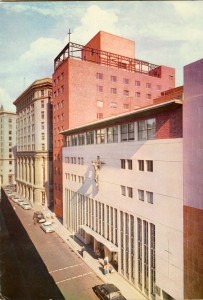 Early photo of the Shrine 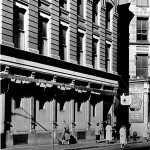 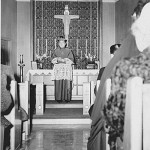 Cardinal Cushing in the 103 St. Chapel 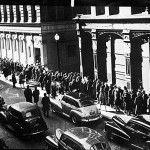 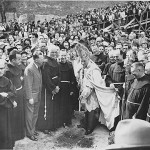 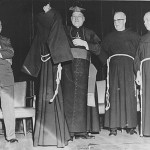 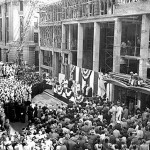 Dedication of the new Shrine at 100 Arch St